Recently my daughter turned five. On the morning of her Birthday I set up a bunch of flowers, some simple decorations and some food to share for Breakfast.

Being a school day and rather than giving my daughter the day off (which I thought about doing) she really wanted to go and be with her friends which was nice. Today was also special because her class had organised a celebration for her at the end of the day and we had planned an after school park party with her school friends.

After dropping my very excited daughter to school, I came back home with my youngest and started to make up some food and pack up the car. At about 1pm we arrived at the park and had a bit less than 1 hour to set up. We popped up a canopy tent and I tied some of our coloured play scarves on each of the four corners of the tent. It was simple but looked so pretty. Flowers and candles went onto the table and the decorating was done. Next I set up the food containers, cutlery and cloth napkins on each table and then found a space to put out a compost bucket and a container for all the dirty plates/cutlery. I had every intent to take photos but I just ran out of time.

After setting up, we left my husband’s mum to look after it whilst my husband, son and I headed to my daughter’s school to attend her ‘in class celebration’. When we arrived my daughter met us at the classroom door and brought us into the room where all the children were sitting in a circle. There was four chairs for each of us including my daughter to sit on. We shared photos and stories from each year of her life whilst our daughter held a small globe (represents the Earth) and walked around a candle (which represents the Sun) and sung a song called ‘The Earth Goes Around the Sun’. Afterwards we sung ‘Happy Birthday’ in English and then in German and then shared some watermelon. It really was a lovely, special celebration. Once the celebration had finished, we left with our daughter a bit earlier than home time (3pm) to get back to the park in preparation for the party.

Once back at the park, would you believe it stormed (heavy rain and wind with some thunder)! This went on for a while and I was trying hard to cover everything to stop anything from getting damaged. Luckily all the food had been put into containers with lids. The pop up tent we had for shelter was not leak proof and some water got through, which wet the tables, the picnic rug which was meant to be for the children to sit on and the fold up camping chairs. Most things got wet but nothing damaged luckily. The rain didn’t ease so all we could do was wait it out. I was the most concerned that my daughter would get upset thinking no one was going to turn up to her party. The other concern for me was that my phone got wet and the screen kept stalling. I could see that I had missed calls but wasn’t able to check to see who was calling. Suddenly, we saw all of these cars turn up one by one, park and then all of these children came running over with their parents under umbrellas. One of the mums looked at me and said ‘It’s only water’. At that moment I didn’t know whether to laugh or cry but I chose to laugh. I just couldn’t believe everyone still turned up. The children were squeeling with laughter. My daughter thought this was the best thing in the world. Relief!!

I ran back to my car and grabbed a bunch of towels which I gave to the children to put around them as it was a little chilly. After about ten minutes the rain finally stopped, the sun came out and all of the children ran straight out of the shelter and into the puddles and splashed around. There was some very excited children who just spent the next couple of hours playing and having a blast. Luckily being a school day, all of the children had a change of clothes. The parents also thought it was hilarious and had no problem letting their children get dirty.

The cake; I made up two lots of cake balls/bites. One lot was Gluten/Dairy and Egg free (for the children with allergies) and the other lot contained milk but was Egg free). I made up a single cupcake for my daughter to blow out her candle. She chose to blow out one small beeswax candle rather than the five candles we had on display.

Food/Drink; The children had chopped up watermelon, strawberries and grapes on their own table and some sandwiches. The adults had raw vegetables (with home-made hommus) grilled vegetables, some anti-pasto items (sun-dried tomatoes, olives and artichokes), Quinoa tabouli and home-made falafel with some Turkish bread from the Bakery. It was more than enough food and we ate the left overs for dinner. I noticed at most children’s parties we have attended so far, many of the children don’t touch the raw vegetables, so that is why they were on the adults table, but of course they can still have anything they like on the adults food table. I set up separate tables so that the children could be more Independent.

Drinks wise we only served water in one of those water filters on tap so the children could easily get their own drink. We used some small ceramic cups and some paper cups in the end and I didn’t have enough to cater and I forgot to borrow extras. The few paper cups that were used, we have composted them as they are biodegradable and apparently don’t contain a plastic liner. Hopefully that was the right thing to do.

Decorations; I kept it really simple with the same flowers that my daughter got in the morning but just put them into a smaller glass jar I had at home. The plant (no idea the name) on the right was part of the flower arangement my youngest got for his Birthday a couple of weeks ago. 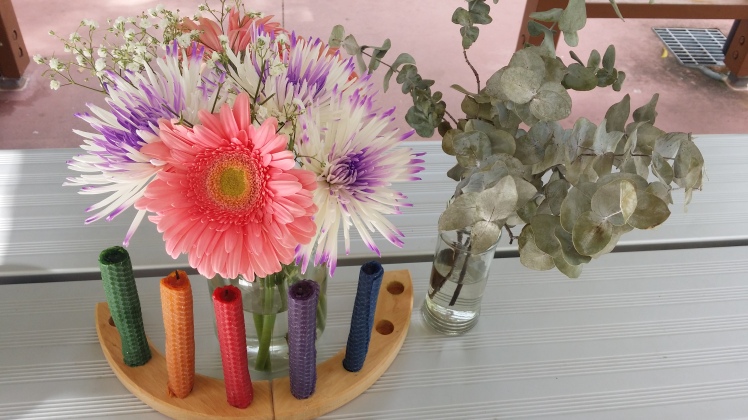 Reusables; for plates we used reusable plastic picnic plates we already had. These were the most practical as I couldn’t see how I would have been able to get all our ceramic plates to the park, plus they are heavy and we didn’t have enough to cater for everyone. We also provided our own forks, spoons and cloth napkins from home.

Overall, the party went well, the children including my two had a lot of fun and we managed to create very little waste. Yes there was more for me to carry and washing up to do when we go home but I didn’t mind.